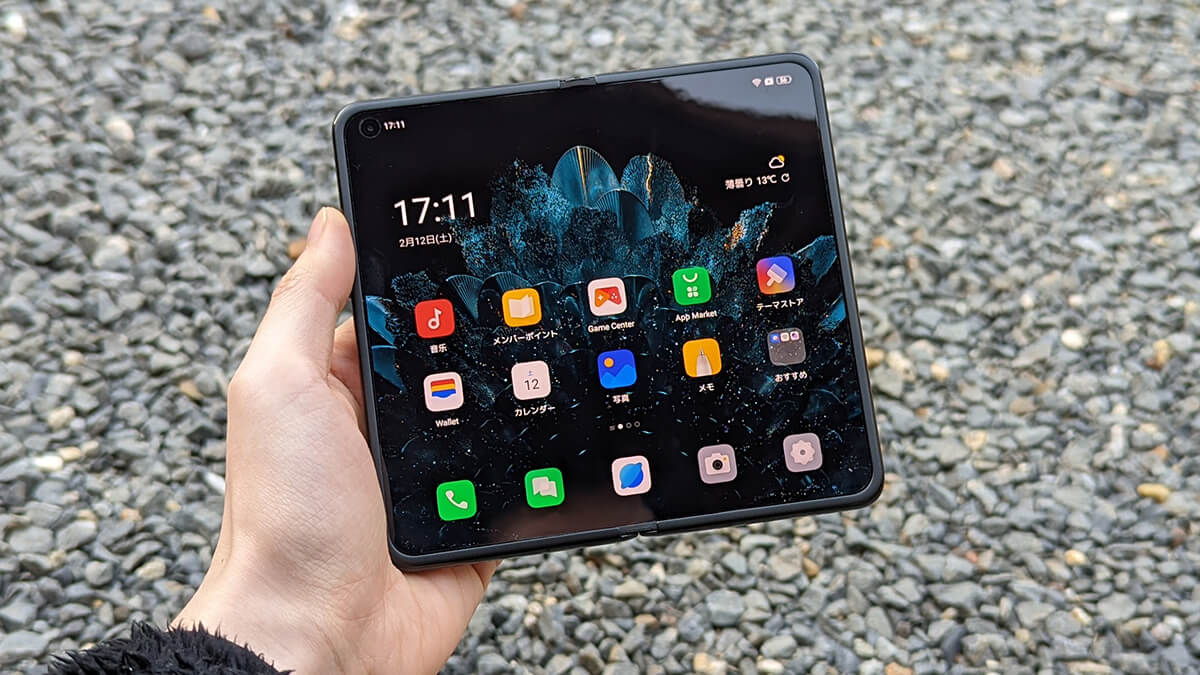 OPPO Find N is a foldable smartphone powered by Snapdragon 888.

Unlike other foldable devices, the creases are hardly noticeable.

The 14:15 aspect ratio, which is unparalleled and close to square, may increase the sense of immersion depending on the application, or on the other hand, the blank space may bother you.

Personally, I didn’t have a situation to use the outer sub-display, and I thought it would be more appropriate to call it a foldable tablet rather than a foldable phone.

When you open the box, the base floats up, which is a gorgeous feature.

Main display with no visible creases

The center crease is so unnoticeable that you can’t tell unless you reflect light, and it looks just like a normal display.

Folding is quite smooth, and when the screen is on, the wallpaper moves according to the angle.

You can’t do it with one hand indeed, you have to hold it with both hands to fold it.

A protective film is attached from the beginning, but it is a soft type that can easily be scratched by sharp objects such as claws.

There are bumps on the screen to prevent the screens from colliding with each other, and the protective film does not cover the edges perfectly, so it seems to collect dust easily.

The aspect ratio can be adjusted for each app

Due to the special aspect ratio of 14:15, there are some apps that will lose their layout in full screen mode.

Browsers, for example, will give you a layout similar to what you see on a PC if you make it full screen.

Games like Genshin will also adjust the UI properly when you go full screen, but it’s a little difficult to play because of the narrow view.

Also, since there are not many tablet-optimized apps for Android, there are cases where the screen orientation is fixed on its own.

For example, in the case of Uma Musume, you can only play it in full screen mode with the punch hole in the upper right corner.

Also, some effects may not be applied all the way to the edges, so if you are using an app with a fixed layout, I think it is safer to leave it at 16:9.

The 14:15 aspect ratio is useful when enjoying e-books such as Kindle.

You can display the book as a spread, which is about the same size as when viewing it on paper (a little smaller).

Note that the Kindle app will show a single page view for your phone if you don’t set anything.

To fix it, hide the front camera for Kindle by going to “Front camera view settings per app” in Settings.

Text can be displayed as a spread without any problem too.

The white color is beautiful and not yellowish, thanks to the display made by Samsung.

Margins are noticeable during video playback

In particular, many video apps such as YouTube have 16:9 aspect ratio contents, so the OPPO Find N’s aspect ratio results in a half-baked display.

I think it’s good for splitting apps and running different apps while watching them at the same time.

Splitting an app is easy with gestures.

Swipe down the center of the screen with two fingers to split the app, and can adjust the size of the split.

The non-sub-display side of the back of the OPPO Find N is fingerprint resistant.

It is smooth and does not smudge easily.

The secondary display is 5.49″ HD+ resolution and supports only 60Hz refresh rate.

It is 15.9mm thick when folded, which is equivalent to two smartphones.

When folded, the power button with the built-in fingerprint sensor and the volume keys are in the same position, so it is a little easy to press the wrong buttons.

When folded, there are no gaps at all, so you won’t get any dust afterwards.

It’s amazing that we can make a 7.1-inch tablet small enough to fit in your pocket.

The secondary display is probably made by BOE.

In contrast, the main display is a diamond array and is made by Samsung.

The panel is made of E5 material, and it’s great to get the same level of vividness and brightness as high-end smartphones on a large 7.1-inch screen.

The design is also similar to the OPPO Find X3 Pro, with a gentle curve around the camera.

The camera can be folded while shooting, and if you turn it to 90 degrees, you can fix the OPPO Find N on its own as if you were using a tripod.

The secondary display will be in contact with the ground, so it will be vulnerable to scratching and slipping, and you will need to be brave.

Even with backlighting, flare is less likely to occur and you can take beautiful pictures.

When shooting night scenes in total darkness, you can take pictures bright enough to see the illuminated branches.

Play Genshin at average of 52 FPS

The OPPO Find N’s benchmark results showed that its graphics performance was higher than that of Snapdragon 888-powered devices.

At 7.1 inches, it’s larger than a regular smartphone, so it’s probably relatively easy to dissipate heat, just like a tablet.

With UFS3.1 storage and LPDDR5 memory, it’s fast there.

As with realme GT 2 Pro, there is an option to stabilize the frame rate called “Ultra-steady frames”, so I played with this option enabled.

I ran the Genshin at the highest quality, 60FPS setting and the highest load and measured with WeTest PerfDog, the average was 52.4FPS.

The back does not get too hot, and the average consumption is relatively low at 758.2mA and 2945.7mW.

Thanks to the near-square aspect ratio of the OPPO Find N, it is easy to use the 16:9 screen side by side when folding it to 90° or splitting the screen.

While it’s hard to take advantage of the full-screen display when playing videos, you can view e-books in a spread view, which is not possible on a smartphone.

And yet, when folded, it is smaller than recent high-end smartphones, and is recommended for those who want to carry around a large screen.

Although it is inexpensive among the foldable devices, it is still more expensive than regular high-end smartphones.

The OPPO Find N was my first experience with a foldable device, and I felt that it would become quite popular if mass production continues and it becomes cheaper.