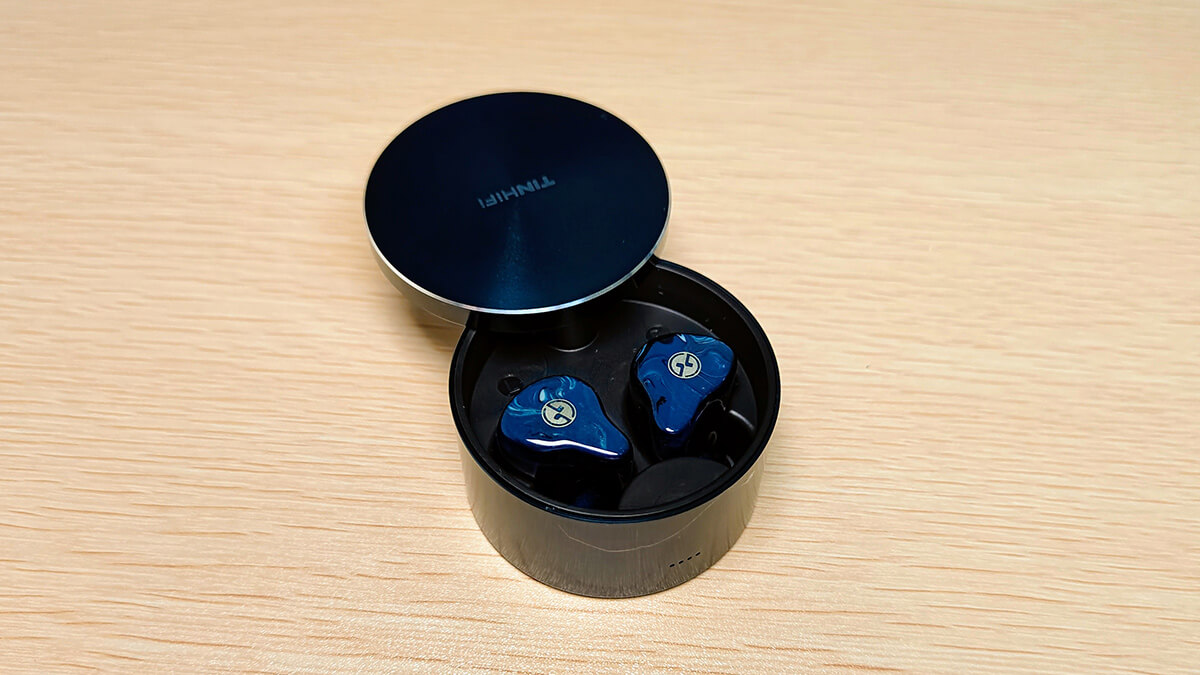 It is equipped with a 6mm beryllium-plated diaphragm driver, which is said to be the first fully wireless earphone.

Included are earpieces, USB Type-A to C cable, and instructions.

This case has an interesting structure in that pairing starts when the lid is slid open.

However, since it is a type that closes only with the force of a magnet, it may open by hitting other objects in a bag.

It has the shape of the type often seen in wired earphones rather than fully wireless earphones, and fits well in the ear.

When taking them out of the case, they feel a little slippery and difficult to pull.

My ears did not hurt even after wearing them for a long time.

The remaining battery charge is indicated by an LED indicator on the side.

The battery in the TinHiFi Tin Buds 3 case is 400mAh and can fully charge the earphones up to 5 times.

The earphones by themselves can play music for up to 6.5 hours.

The earphones weighed 12.5 g for both ears.

Including the case, the weight is 66.4g.

Supported codecs are AAC and aptX

At the time of release, it was described as supporting aptX LL and aptX Adaptive, but unfortunately, it actually only supports SBC / AAC / aptX codecs.

When I connected the TinHiFi Tin Buds 3 with the FiiO BTR7 Bluetooth receiver, which is confirmed to be aptX Adaptive compatible, I could only connect with aptX.

It has Bluetooth 5.2 support.

I could clearly feel the movement up and down, left and right.

However, when it came to distant sounds, they sounded a little quieter than other earphones.

Even in songs with strong bass, such as Billie Eilish’s “bad guy,” there is no unpleasant feeling that the sound pressure has been simply increased, and the bass can be enjoyed comfortably.

The vocalist’s whispering voice also sounds beautifully as if she is whispering in my ear.

In BUMP OF CHICKEN’s Acacia, the high hi-hats kept ringing and sometimes sounded a little crushed on the TinHiFi Tin Buds 3.

The stronger bass seems to be a bit weak in reproducing the highs.

The TinHiFi Tin Buds 3 are designed to be fully wireless earbuds, but inherit the same attention to sound quality as wired earbuds, with particularly pleasant bass and high resolution.

The TinHiFi Tin Buds 3 can be purchased on HiFiGO for $89 and up.