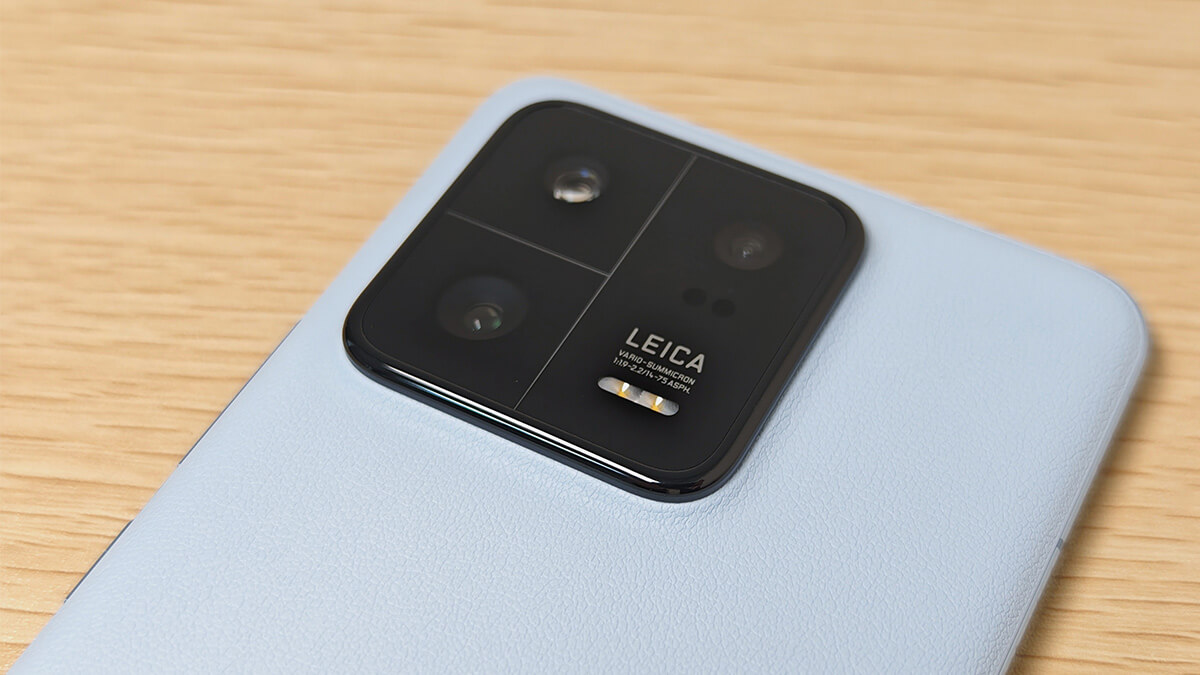 I purchased a Xiaomi 13 Pro.

The Xiaomi 13 Pro is a smartphone powered by the Snapdragon 8 Gen 2.

It has the same 1-inch SONY IMX989 camera as the Xiaomi 12S Ultra, and thanks to the Snapdragon 8 Gen 2, the performance is so much better than the Ultra.

The included charger is capable of 120W charging even in 100V regions such as Japan.

The Xiaomi 12S Ultra could only charge at 67W, but the Xiaomi 13 Pro can now benefit from 120W fast charging even with the same 1-inch sensor.

The colors are vibrant and viewing angles are fine.

The Xiaomi 13 has a flat display, but unfortunately the 13 Pro has an edge display.

It uses Samsung E6 material and is a diamond pixel array.

When measuring brightness with the LX-1336B during HDR video playback with automatic brightness adjustment on, it reached a maximum of 1044 nits.

In high brightness mode, the brightness rose to 1169 nits, which is easy to see even outdoors.

The total touch latency measured by the WALT Latency Timer was 37ms.

Since the vivo X90 Pro+ with Snapdragon 8 Gen 2 had considerably lower latency than the previous model, I had hoped that the processing performance of the 8 Gen 2 might be a factor, but in the end, it seems that the panel makes a larger difference.

The Xiaomi 13 Pro has an in-screen fingerprint sensor.

It is fast enough and accurate enough.

Leather version is good to the touch

The one I purchased this time is the Technology Nano Skin version (科技纳米皮).

It is made of SKIN / nano-tech / (Techno-nano leather), which is said to be stain-resistant, and at the launch presentation, it was appealed that even if it is covered with paint, it can be wiped off with a towel. I don’t have the courage to actually try it, though….

It feels good to the touch, has a good grip, and is less slippery than glass.

The weight was 213g including the protective film originally attached.

The Xiaomi 13 Pro has a triple camera.

All are standardized at 50 MP.

With the vivo X90 Pro+, the parts are just on top of the leather and it feels a bit cheap, so personally, the design of the Xiaomi 13 Pro is still better.

All photos were taken in hand-held auto and LEICA Vibrant and are saved here.

You can choose between LEICA Vibrant, which gives a vivid impression, and LEICA Authentic, which is closer to realistic tints and has more vignetting.

Starting with MIUI 14, a feature called additional shutter has been added to the camera app, which allows you to place the shutter button in any position you want, in addition to the button at the bottom.

Even in night scenes, while the white pops are not easily seen, the image becomes instantly darker when zoomed in. It sounds good to say that you can take pictures just like the naked eye, though…

Compared to the vivo X90 Pro+, it is very different.

The night view zoom seems to be usable only up to 2x.

LEICA’s tuning often results in photos that are atmospheric at best, or dark overall at worst.

Saturation is a bit high.

Flare and ghosting resistance is weaker than the vivo X90 Pro+.

At 70x, the image is quite blurry.

I think 2x to 3.2x is the realistically available limit line.

In super macro mode, I was able to get as close as 5 cm and could clearly see the fibers of my clothing.

It is not possible to take pictures of the OLED array on the phone.

Xiaomi 13 Pro supports many bands and VoLTE for various carriers.

The Xiaomi 13 Pro is no longer Harman Kardon tuned and still has asymmetrical stereo speakers.

The speakers are weak in bass and sometimes sounded a bit shaky, although the treble is more audible.

It supports 120W fast charging, which can fully charge the battery in 19 minutes, as well as 50W wireless charging.

The audio output delay was 38.1 ms when measured with the WALT Latency Timer.

The upper side is like this, with an infrared port.

The power and volume buttons are concentrated on the right side.

There is nothing on the left side.

It appears that the performance is adjusted for Genshin to suppress performance in the package name determination.

AI performance measured in Geekbench ML with TensorFlow Lite and NNAPI was a score of 649.

In the 3DMark Wild Life Extreme Stress Test, the score was 3667, with a temperature increase of 24°C and battery consumption of 16%.

Despite the high load, the stability is high at 91.5%.

In PCMark Work 3.0, which measures performance in everyday use such as document operations, the score was 13842.

Like the vivo X90 Pro+, this score is not too different from the Snapdragon 8+ Gen 1.

Too high performance in everyday use will only increase power consumption, so it may be that the performance has been adjusted to be sufficient.

The UFS 4.0 storage and LPDDR5X memory is top class speed.

In everyday use, random reads/writes easily affect the feel of the operation, and combined with MIUI 14’s animations, we felt that screen transitions and loading were quite smooth.

Here’s my benchmark results for each SoC and device. List of Benchmark Results AnTuTu benchmark is a popular Android benchmark app, but often falls victim…

Playing Genshin at the highest quality and 60 FPS setting and measuring with WeTest PerfDog, the average was 59.9 FPS with a power consumption of 94.22 mW per FPS.

The battery temperature only rose to about 35°C at maximum, and although the side frames got a little hot, it was not so hot that I could not hold it and I was able to play comfortably.

Compared to the vivo X90 Pro+, the power consumption was a little higher.

In World of Tanks Blitz, I played at 120FPS settings and all graphics settings at their highest values and averaged 96.3FPS.

For some reason, it was limited to 90 FPS in the middle of the game, even though the heat was not particularly high.

Almost all pre-installed apps can be removed on MIUI 14

MIUI gives the impression of having many pre-installed apps, but to my surprise, all apps can be uninstalled except for those that are minimally necessary for the phone to work.

Simply long press on the home screen and check the box to uninstall them all at once.

You can also change the style of the Control Center and set Quick Settings to appear at the top.

For some reason it was turned off on the Xiaomi 12S Ultra with MIUI 13, but it has been restored, perhaps because it was unpopular.

MEMC, which provides frame interpolation in video, is no longer supported.

You can choose between 3, 5, and 7 GB of memory expansion.

Although faster with UFS 4.0, there is still a gap with memory speed, so it may be better to turn it off if not needed.

The Xiaomi 13 Pro is quite powerful thanks to its Snapdragon 8 Gen 2, but it also has lower power consumption and heat generation, so it is no exaggeration to say that those who are using Snapdragon 8 Gen 1 or earlier smartphones should switch now.

The Xiaomi 13 is available in China starting at 3999 yuan.